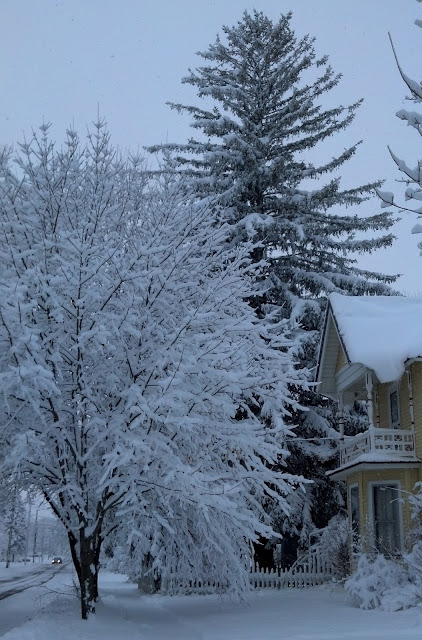 The most recent snowstorm here in the Finger Lakes, gave us an absolutely beautiful, fairy-tale world. My husband and I stood in the bay window, both of us enjoying the other-worldliness Mother Nature had created for us. Snow silences. To stand on the street and gaze is to muffle the real world. Even that car coming up the freshly-plowed street seemed to respect the quiet, gliding to a stop at the intersection, the driver giving me a friendly wave as I snapped picture after picture.

Most of you know, my husband is a painter (to see his newest work, find him on Facebook as Steve Duprey). As we stood in the window, he spoke of how to capture this beauty in paint. In his head, he was already at his canvas, figuring out which brush, which technique would express not only the scene, but the feeling of awe we both shared.

And of course, as a writer, I paint with words. My mind brimmed with half-formed phrases, the old saying "a picture's worth a thousand words" constantly nagging in the back of my mind.

It's true though, isn't it? Any picture worth describing IS worth a thousand words. While the adage was spoken with the intent to dismiss writing over painting/photography, there is another side to that saying. Any scene worth describing is worth spending a lot of words on. Specially chosen words. Words that capture not only what is seen, but what is felt as well.

The photo above, out of context, can be cold. It's just another snowstorm on some street you've never seen. With what I've written, however, it is my hope that it means something to you now. Pictures (of any sort) and writing can go hand-in-hand or they can exist as separate entities. Some of those phrases and half-thoughts I will save for future stories (snow captivates me as much as I don't like driving in it. Need proof? Click here). Some of what I pondered is already here in this post.

So what does all this have to do with being a writing workshop? Read on!

Find a scene that would be much easier to take a picture of than describe. It could be right out your window or down the street at the local park. It might be the place you are right now.

Using words, capture the physical description of the scene infused with the emotions you want to express. Don't make me just see the scene, make me feel something as well.

(This workshop pairs nicely with this activity)

Stay safe, enjoy your surroundings...and use them to write!

Diana
PS. Thanks for the tips, they are always welcome!