Some of you have written to ask why I haven't released a full-length novel in a while and I figured if a few have written, more are thinking the question. The quick answer is, I have - or at least, have started to.
Diamond Studs and Winter Studs are two anthologies that contain stories from Ruby Storm, Ruth Kerce and me. We've had great fun working on them together and I have the emails to prove it. :) We toyed around with writing an anthology called Service Studs -- but we just couldn't quite get our timing right. Ruth published (with our blessing) her contribution as an independent, stand-alone book. If you haven't read Hot on her Tail yet...you should!

Ruby and I have yet to finish our stories. My work-in-progress, tentatively entitled Services, has been giving me grief for the past year. The characters talk - and then they don't talk. I figure out a section of the plot and then they don't like it. I'm a pantser (meaning I don't work from an outline) but this one has even driven me to try writing the synopsis first and STILL the characters won't cooperate. I managed to get nearly fifty pages of the story written in the early part of this summer but then they stopped talking once again and I'm ready to abandon them.

In fact, I got so ticked off at the silence of these characters I DID abandon them for a while and wrote Love in the Afternoon (my newest release - do you have it yet? Why not??? It's a Quick Quickie and the price is certainly right!). Normally I come up with the title after the story's written, but for this one I started with a title in my head: Naked in the Afternoon. By the time the story was on paper, however, I realized it needed a one-word change and Ellora's Cave is publishing it as Love in the Afternoon. Sweet!

Anyway, Services is still sitting here, nearly half done, giving me fits and not cooperating. I started a brand-new story day before yesterday and it's very possible I will chase that one down for a while. I'd like to give my readers another full-length (although watch for Remembered Love, a Naughty Nooner free read coming from me shortly), but it looks like I'm back to the drawing board!

Email ThisBlogThis!Share to TwitterShare to FacebookShare to Pinterest
Labels: releases 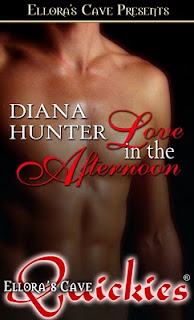 Need a short little pick-me-up...or perhaps a little love story to set the mood? Love in the Afternoon, my newest Quick Quickie from Ellora's Cave releases today and is perfect for those of you who are looking for a hot, sexy, inexpensive read.

She meditates, finding the quiet within. Quiet she knows he will disturb in his own seductive manner. When he calls her into the bedroom, she follows, trusting him to lead her to a place where all things are possible.

Read the blurb here and an excerpt here -- and then purchase this short piece, sit back, and enjoy Love in the Afternoon.

Since I last posted I've driven to Florida and stayed for a week's vacation with my family, taken my 18-year-old son off to college (he's the youngest -- sniff!) and watched my nearly 20-year-old daughter drive her own car off for her junior year in college. It's been an emotional rollercoaster since August 1st! Walt Disney World for the final family vacation, watching the younglings fly the nest -- and then staring at their rooms half sad that they're gone, half planning what can be done with them now.

In reality, I won't change their rooms up -- yet. They still come home for vacations and summers. Even though they're spending the majority of the year away, they each still need to feel that this is home. And it will be for a little while yet. With any luck, my daughter will get an internship this coming summer as a stage manager (anyone have connections with a theatre? Calling all internships!). When she does, she'll live away more than here for the first time. It's an adjustment, that's for sure!

While doing all of the above I managed to read only one book, The Sunne in Splendor

by Sharon Kay Penman. Someone really needs to edit her books for style. This is the second one I've read and she has a fondness for passive voice that drives me nuts. But she writes historical novels and I find myself getting immersed in the history. Since I know little about 12th and 13th century England, reading her books has certainly helped me out.

The Sunne in Splendor ostensibly is about Richard III, who, according to her research (and mine when I looked to verify her overall take on him), isn't such a bad guy after all. Shakespeare wrote from the winner's perspective and since the Tudors overthrew the Plantagenets and Elizabeth I was a Tudor, I can understand him wanting to make Richard III a terrible, evil man.

But like all history, there are two sides. This book tells the story of Edward (Richard's brother and king before him) and Richard. A family tree at the start of the book would be helpful (note to publisher to add that in future editions) because there are so many of them named the same names. Originality wasn't a strong suit; family ties were prominent.

Overall, I recommend it as an easy way to learn about the people and the time period. She intersperses customs (those newfangled forks make an appearance) with historical events, family squabbles and everyday happenings. Along the way you come to care about Richard and want to know what happened to him. I had to slap my hand more than once when I got impatient and wanted to skip to Wikipedia and get the bare facts. It was worth the wait, although I would've liked a first-person account of Richard's ending rather than the second-hand information she presented after the fact.

The book takes some time to get through. It's 931 pages in paperback. If you like historical fiction, it's a good one.

Okay, off to figure out what to do with my days now that I only have two social calendars to keep track of (my husband's and mine)...