I’ve seen several postings referring to the past week as “Week Four,” as if we’ve begun a new calendar. And it’s quite possible we have. Will we think of the future as AC (After Covid)? Seems to me there’s a good science fiction story there somewhere. Only it wouldn’t be fiction.

By my reckoning, however, last week was Week Five, since the colleges went to remote learning (a fancy way of saying all classes are now online classes) the week of March 9th. My first post on the matter was dated March 13th

But that’s here in New York. Other parts of the world, heck – other parts of the country – have a different timeline. And are we only referring to when the state went into lockdown or do we go all the way back to the first reported case? Glad the history books are going to fight this battle. For us currently living it, our start times are staggered.

I visited my Dad two weeks ago. From afar. As in, through a window. I took him some things to help him pass the time and a loaf of bread my husband had just made. Dropped it at the front desk and then went around and we talked on the phone while looking at each other through his window. Thankfully, he has a place on the first floor and we could do that. The upstairs apartments of the assisted living facility all have balconies, but it was too cold for him to stand outside for long. Still, I got to put eyes on him, as it were, and that made both of us feel better.

My kids are doing well. Didn’t take long for my daughter to find a way to do theatre over the Internet. Wallbyrd Theatre Company, based in Rochester, NY, is doing a live reading of Alice in Wonderland, complete with costume pieces and special effects every Sunday night at 8:00 on Facebook. Shameless plug here – my daughter is production manager and takes everyone’s Skype calls, pulls them together and creates magic we can all watch – and does it live. Look for it tonight – they’re on chapter three (and the narrator tonight is well-known in this household as both a theatre director and stage actor. Tonight he makes his Internet debut!).

My son works in buildings and grounds at a local church. You’d think he’d have gotten laid off by now, since the churches are all closed (well, their physical presence is closed), but you’d be wrong. Because so many places have shut down, the American Red Cross was planning to cancel blood drives, and at a time when the need is critical (and it still is – if you can manage it, find a blood drive and volunteer. You’re needed!). The church where my son works said, “Come on over here. We’ll open the building as you need it.”

So that’s what he’s doing. He’s not working every day, but when there’s a blood drive (about one a week), he goes in and cleans before they arrive, then disinfects and sterilizes after they leave. He’s one of the front line support workers – and Mama gets a little worry mixed in with her pride sometimes.

And what am I doing? Yesterday I attended a webinar given by Jim Azevedo of Smashwords on ebook publishing. Yes, I know. I’ve been self-pubbing my books since just before EC’s demise. My first self-published book was a collection of stories from The Ramayana, a Hindu epic, quickly followed by Table for Four, which had gone out of print at Ellora’s Cave. What’s cool about ebook publishing, is that nothing is ever “out of print” because it’s all digital, so always available!

Anyway, the webinar was in four parts and kudos to Jim for keeping it interesting and informative. Even as an experienced self-pubber I learned a lot. Once I take some time to process it all, watch for some cool, new developments in the months ahead. 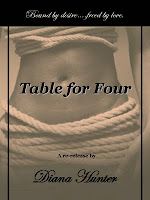 In the meantime, Smashwords has offered authors a chance to extend their Readers Give Back sale. Originally slated to end tomorrow, it now extends all the way to May 20th. I’ve set all my books there for 60% off – including The Ramayana (which the discount makes free!) and Table for Four (which comes in at a whopping $2.00!).

SIDENOTE: I went to post links to both books mentioned above, only to discover some formatting issues with the Ramayana. Decided to add back matter with links to it while I was fixing and…needless to say, I went down the rabbit hole (to borrow from Alice). Two hours later, I now have a list of stuff to fix on my website, which I have shamefully neglected over the years. Titles that are no longer available, covers that need MAJOR overhauls, links that go nowhere…yeah. I have some work to do. In the meantime, know that all is forthcoming. J

So watch Alice in Wonderland on Wallbyrd’s Facebook page tonight, check out the sales at Smashwords, and donate blood (if you can). In the meantime, stay safe and know I’m thinking of you all!

In the immortal words of Joey Tribbiani:

In my last post, I spoke of our new normal – and how it wasn’t even worth putting that word in quotes anymore because, well, this is just how life is now. As we come to accept our current circumstances, we adapt our behavior and life moves on. The sun still rises, the earth still turns, and time still continues its forward march.

The concern, of course, is that we’ll become so acclimated to our social distancing that we won’t go back. Arm-chair psychologists and experts alike have been writing about what life on the other side will look like – and for once those words don’t mean death. Well, they do, but…grrr.

This is the problem when language is slow to catch up to current situations. It’s why we still call them “floppy disks” when they’re encased in hard plastic, it’s why we still call our portable computers “phones” when they do so much more. Usually, “life on the other side” refers to the existence after death. Now we’re using the same words to refer to coming out from the COVID-19 curve – which we have flattened at least a little bit.

As for me, I’ve always been one to take life as it comes. I don’t agonize too much about what’s currently happening – don’t get me wrong, I’m very careful about staying home, staying away from people, about social distancing – but I’m not panicked and I’m not out hoarding supplies, although like every mother, I worry some about my kids and hope that they’re behaving themselves.

So no futuristic predictions from me on what society will look like. Science Fiction is a genre I enjoy reading, but have always been lousy at writing. I love that there are writers who can take a look at the current situation and project it into the future and play the game of “what if?” but it isn’t a talent I have.

Sidenote: Why is it all Science Fiction authors predict a gloomy future for us? I’ve long suspected they’re writing warnings: “Change your behavior or this will happen.” I need to read a rosy futuristic story – where we have a Happily Ever After ending!

Here in the Finger Lakes, the daffodils are up, the sun is shining (today, anyway), the yard work is getting done, the basement is nearly cleaned out, and stories are being written – not all of them fictional. Many of those staying safe at home are journaling their experiences, recording for posterity the details of what it’s like to actually live through a pandemic. We don’t have many of those records from past ones, so we hope our words will give comfort, strength, and understanding to those who go through this in the future.

Because they will. This isn’t the first and it won’t be the last. With any luck, it’ll be the only one in our lifetimes, though. And by recording our precautions, our hopes, our fears, we can tell our descendants that they, too, will adjust to the circumstances and come out on “the other side.”

Leave a comment - for now, for the future -- How're YOU doing?

DON’T FORGET! All my books are 60% off at Smashwords for the next few weeks. Books are the one thing  it’s okay to hoard – at least, that’s what I’m telling myself every time I add another one to both my virtual and physical shelves. J