I know. Every year I say I'm going to do this and every year I fall apart (here, here and here). Why? Because I taught high school and, here in New York State, grades are due for the first term the second week of November. I'd have great intentions, then get flooded with term papers to grade, tests to evaluate, projects to assess. Anyone who still thinks teachers work only 40 hours a week is living in the stone age.

Besides which, November, for me, is also the lead-up to Christmas. My family usually hosts Thanksgiving, which is a minimum of two full days of preparations. The day after Thanksgiving is decorating day when the entire family is put to "work" and the house is transformed. Christmas carols play for the first time and leftovers abound. And the next day, the Saturday of that long weekend, is baking day. Christmas cookies and, increasingly, Christmas candies come forth from the kitchen while the TV watchers gorge on Christmas specials.

So what makes me think this year will be any different? For one, I'm not teaching. Well, not in that schedule, anyway. I'm adjunct at the local community college, but have no grades due in November. At all. Yay!

For two, we're not hosting Thanksgiving this year. That means the decoration boxes can come down Wednesday night and we can start decorating when we get home on Thursday. We've done that a few times over the years and like the relaxed feel. Of course, my son no longer lives at home, so we'll be one set of hands short, but I think we'll be okay. We've repurposed one of the downstairs rooms over the summer, so it'll be fun to find new places for traditional decorations. Saturday will still be baking day. I think I'd get lynched if I dropped that. :)

All this means more time to actually spend on writing come November 1st.

Speaking of immersing oneself in the world of one's story, I'm doing a workshop in Second Life on that very topic on November 9th. Not sure of the time yet, but probably 1:00 or 2:00 SLT. If you're around, come join the fun! I'll post more details and a SURL when I have it.

If you want to sign up at the official NaNoWriMo site, go ahead. I did this year. Because this year, I'm going to make it all the way to 50,000 words in one month. Honest! 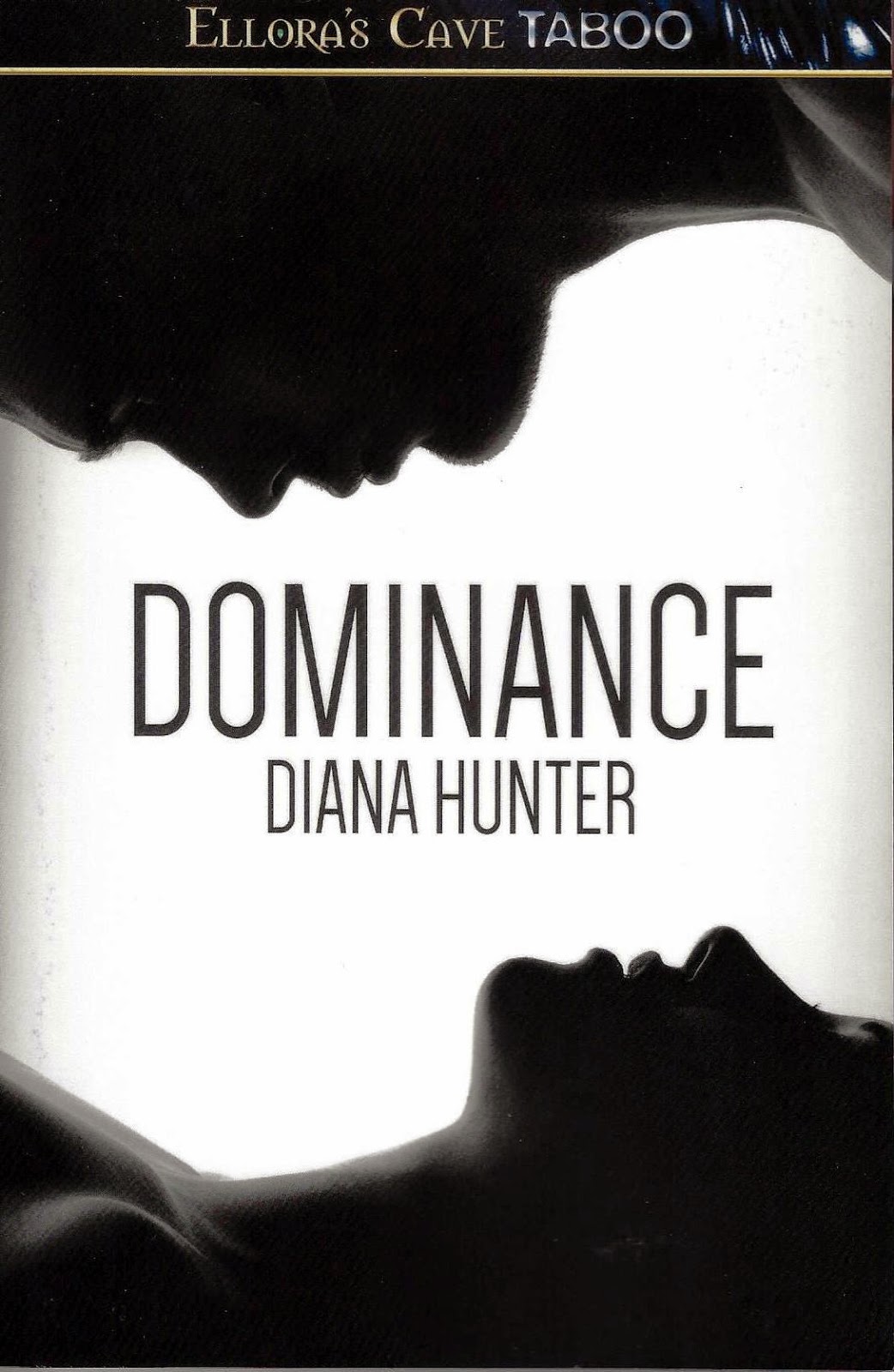 So on Sunday, I got to the Romanticon bookfair to set up my signing area and ten copies of this book are sitting at my spot. Talk about a wonderful surprise! Print copies were done up just for the convention so attendees got sneak peeks at what's coming.

Isn't this a great cover? I love the starkness...the arrangement of positive and negative space with the title (and my name!) so clearly defined.

Slated to be released on November 14th, this print book contains four, count 'em...FOUR of my shorter works:
Love in the Afternoon, Promise for Now, Hooked and Stitches in Time.

Two of these stories were in print in the past. Stitches in Time contains one of my favorite characters, Seamus O'Brien, a leprechaun of love-making nature. Originally written for the Irish Enchantment anthology, this novella is still one of my favorites (don't tell my other books that!).

Love in the Afternoon and Promise for Now are both Quickies that pack a lot of heat into a shorter read. The unnamed characters in the first story enjoy a full afternoon of sensuous activity whereas Carol, in the second story, realizes that her recent divorce now gives her permission to explore her options with her sexy neighbor. ;)

Get out your calendars and mark it down...November 14th, this compilation of four stories goes on sale!

Sidenote: the books at Sunday's sale had a misprint on the back cover of the book. Only three of the four stories was listed (Stitches in Time was inadvertently left off). So those of you who bought the book then, hang onto it! There are only ten of the misprinted covers in existence - and who knows? They might be worth something someday! :)

Well, there we are...the Original Cavemen and me. These two guys are so incredibly professional (and gorgeous, but that's stating the obvious!). You can tell I'm relaxed with the two of them and don't feel the need to be anyone other than myself.

I will tell a little secret about this picture, though. As we were getting ready, I took in a deep breath and sucked in my gut. I said to CJ, "Don't want to show my belly!" He chuckled and said, "I've got the solution to that!" and he took my hand, holding it so my stomach would be covered. When Rodney reached his hand over as well...the effect was complete! CJ...you're a pro, for sure! 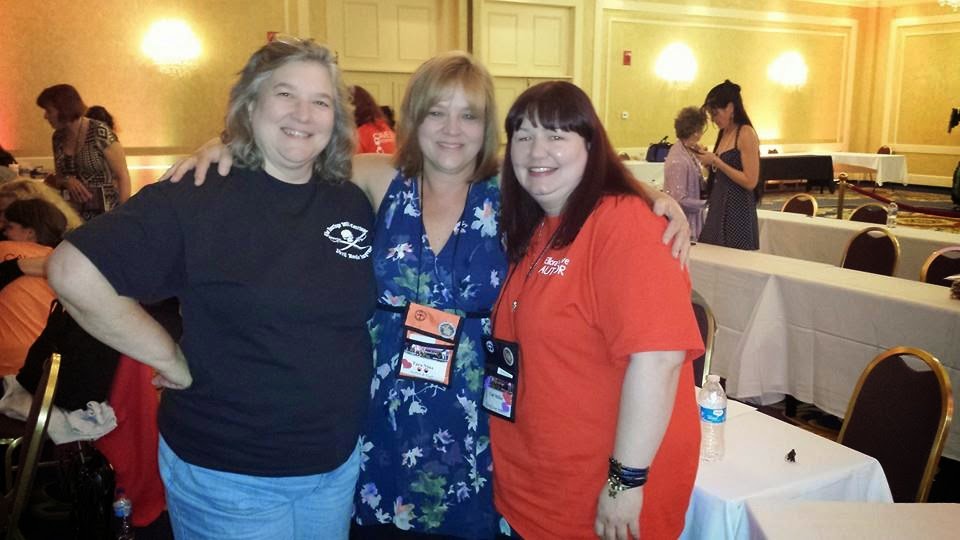 Of course, I got to see old friends, as well. That's Tara Nina in the middle and Cait Miller in red. We're all three members of The Sizzlin' Scribes...a group we formed years ago for the express purpose of combining our money for promotional ads. Somewhere along the way we all became friends and I love getting to see them! 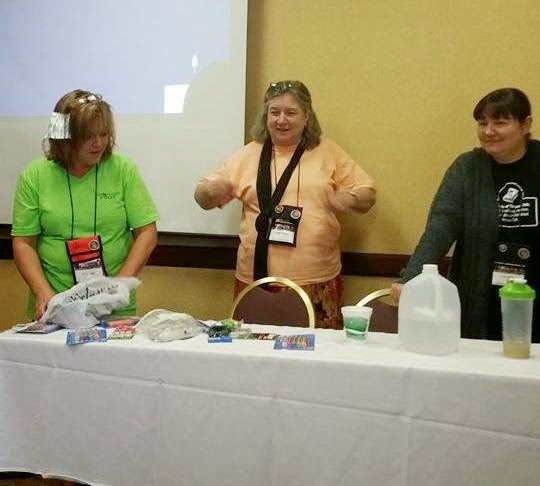 And here we are Blinging our Badges. I have no idea what point I'm making, but I'm doing it with vehemence! 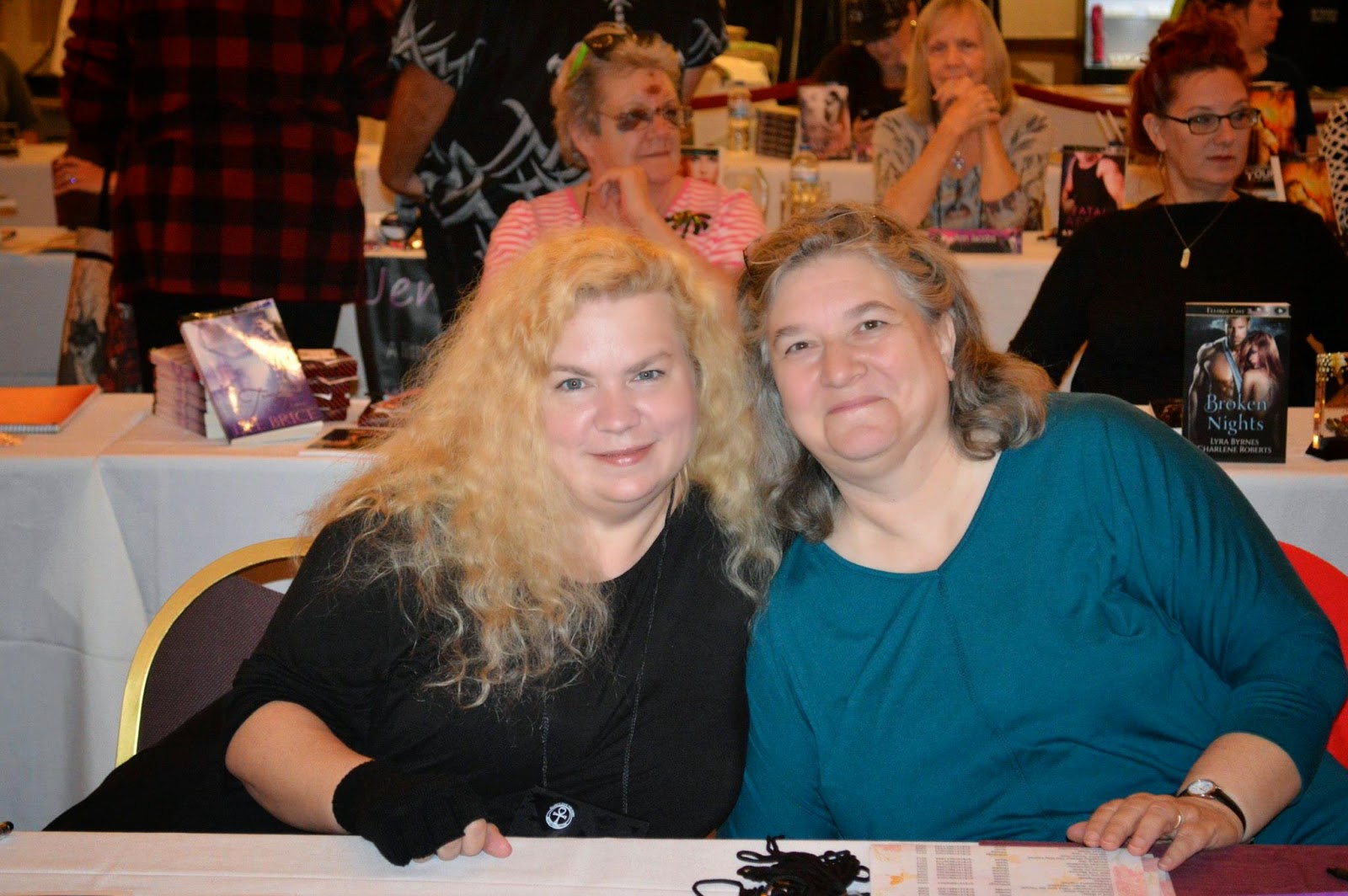 And, of course, RT is also about meeting new people. I sat beside Laurann Dohner for the booksigning on Sunday...she's a wonderful lady and a great author. Thanks to her husband for the picture!

Unfortunately, I didn't get pics of a lot of others I met for the first time. Confession time: I still have a slide phone and it takes crappy pictures. Perhaps by next year I'll have joined the 21st Century and have, not only a smartphone, but one that takes decent photos!

I hope you all can come next year...we can take LOTS more pics!
Play safe!
Diana

I haven't been to Ellora's Cave Romanticon Convention since 2010. Not because I didn't want to come, but because getting time off from my day job became extremely difficult (got a new boss who saw no educational value in bringing back information regarding the changes in the publishing world to my Creative Writing students. 'Nuff said.).

But I'm here this year and have to say, its been a lot of fun seeing so many familiar faces. I'll give a special shout-out to my Scribes sisters, Tara Nina and Cait Miller, but I've enjoyed catching up lots of other authors as well as seeing so many of the EC staff. Sat next to Raelene Gorlinsky last night, have had several conversation with Patty Marks and finally got to meet Jose in person!

Of course, one cannot discuss Romanticon and leave out the Cavemen. Rodney and CJ are two of EC's original Cavemen and both were on hand to meet and greet authors and readers. I have a great pic of me with them and will add it to this post when I get home (it needs to be scanned in and I have no scanner here at the convention). Rodney is ever the wonderful host and CJ is just as handsome as ever!

The young bucks who make up the current crop are, of course, also wonderful eye-candy. DeAngelo was the reigning Alpha Caveman -and it isn't hard to see why. He's the tallest of the Cavemen, but its his beautiful blue eyes that catch your attention...that and he's one of the few with hair long enough to run your fingers through. Perfect for a hero of romances!

This afternoon is the book signing from noon 'til 4:00 pm. After that, I head for home. Will upload pics soon!

Write the book you want to read

That was the best piece of writing advice I got and I no longer remember who gave it to me: Write the book you want to read.

My first novel was a fantasy. It's called Discoveries and is sitting on my computer at just over 95K words and isn't finished. It's close...probably another 45-50 thousand words will do it. Why haven't I published it? Because it was my learning novel. It needs a rewrite. Badly. If there were mistakes to be made, I made them.

But the books I wanted to read, first choice, were still fantasies.

I started writing another one, the Companion series, about ten years ago. The pitch line:

Stuck in a partnership neither wanted, an Earth Mother and her Companion discover a pillaged farm and must find a way to work together as they defend their country from an invader who has powers they don’t understand.

Avon was interested in it at one point, but ultimately passed. Probably a good thing. I didn't have the story structure down then. I do now, thanks to Lynn LaFleur who let me bounce ideas off her long-distance and who has suffered through reading the first draft of the first third of the story.

There is some sex in it, but it isn't the primary genre at all. There's action, adventure, themes of the greater good and of Power vs. what's right to do...all the components of a good fantasy. Now that I finally have the story's structure down, this is the book I'll be working on for the next several months. It's the story I want to read.

Along the way, I'll be republishing a few stories that have been out of circulation for a while as well as putting together a new anthology of short stories (just in time for Christmas!).

Oh! And the current free stories of the 12 Days of Christmas (the even numbers) are going to be 99 cents, just like the others, come November 1st. It'll still be cheaper to buy them bundled together into one volume (that book price will remain the same).

Off to write! Play safe,
Diana