My daughter, Kate, works in the theatre, which gives her a somewhat nomadic lifestyle. Mostly she works in theatres within a fifty mile radius of her apartment but she's not adverse to picking up and going elsewhere (even out of state) if that's where the job is. To that end, this week she's attending the USITT (United States Institute for Theatre Technology) conference in Salt Lake City, Utah, with an eye toward that next job.

Initially, she planned to travel with a friend. Unfortunately, the friend had to bow out (pun intended) and Kate feared she'd have to as well, since now she had no one to share costs with. And then she turned those puppy eyes on her mother...and her mother melted. How could I not?

Besides which, I've never been to Salt Lake City. Flown over the midwest twice (once on my way to Alaska and then again when we went to Disneyland) but St. Louis (RT Convention) is really the only stop I've spent time in the middle of the country.

It will also be the highest altitude I've ever been and still been on the planet (as opposed to flying over it). Rochester, NY has an altitude of about 500 feet above sea level. Our cabin is about 800 feet above - but Salt Lake City is 4000+ feet above. Whee!

At first I'm thinking, Kate will be at the convention all day and I won't have anything to do. Might be time to start a new story or finish an old one. Or go sight seeing. What is there to see in Salt Lake City besides the Mormon Temple anyway?

Um...gee...only the world's largest Family History Library, filled with hundreds of thousands of genealogical records collected from all corners of the globe. And it's open to the public. For free. Guess where I'm spending MY days!

The last two weeks have been spent organizing all the scraps of paper I've written family stories on, compiling lists of what we know and finding the holes of things we don't know. Some of the family lore I've been able to verify with census records or using the SSDI (Social Security Death Index), but holes still remain. And a few very big, very solid walls that I can't seem to find a way over, around or under.

So now I have a notebook and a flashdrive filled with What We Know about the Frawley, Benjamin, Broschart, Schmitt, Ingandello, and Scaramuzzino families. I've chosen not to look further into the Pierces and the Ritters on my mom's side of the family because I have a second cousin who has done a LOT of work, at least on the Ritters. And the Duprey/Garrow lines are so convoluted and twisted it would take a lot more than the three days I have to unravel them alone.

That's right. Three days. Three days spent in a library. Three days devoted to researching the family trees. Three days of uninterrupted immersion into their stories, their joys, their defeats.

Yep. I am SO looking forward to looking backward!

Email ThisBlogThis!Share to TwitterShare to FacebookShare to Pinterest
Labels: historical 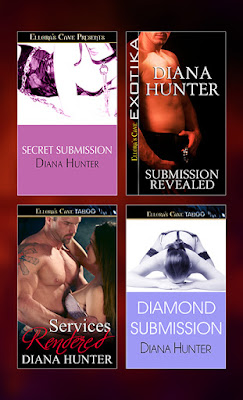 Now available! All four books bundled together in one set. In Secret Submission and Submission Revealed, Phillip and Sarah Townshend have quite the set of experiences, both in and out of the bedroom. Thank goodness for friends like Will and Jill who are there to pick up the pieces!

John and Lauren find themselves needing those friends in Services Rendered. As a Civil War re-enactor, John enjoys the sound of cannon and the thrill of (safely!) charging the field. But Lauren's nursing of real soldiers on real battlefields leaves her baffled by his hobby. Thankfully Phillip, Sarah, Will and Jill are all there to help their friends through.

All four books are still available separately or get them bundled today (click on the picture for the bundle)!

Don't forget to leave a review of one or all books. :)