As the nation still struggles with a pandemic, racial issues, and politics that are running amok, I took the summer to do something I haven't done in ages: read.

And I don't mean read a few books here and here, as is my usual M.O. I mean READ like I used to before kids, before marriage, even. Read like I was back in junior high and going to the library every week to get books. Read as in pick one up just after breakfast, remember to stop long enough to make myself a sandwich for lunch and get to the dinner table when my husband's holler pierces through the story I'm encased in. My mom used to say she could set a bomb off next to me and I wouldn't notice if my nose was stuck in a book. This summer, my husband learned the same thing.

Because we couldn't go anywhere physical, I've spent a lot of time down at the cabin, where Internet is spotty at best. While there I puttered around on odd jobs that took less than ten minutes, and then settled in with a good fantasy series - and stayed there.

So what's my list? I already put up part of July's; here is the rest of what I read that month:

By Peter V. Brett: The Skull Throne, The Daylight War, and The Desert Spear (I'd already read The Warded Man, the first in the series and said so in my other post)

In August, I finished off Brett's series with The Core. Overall, good series. Liked most of the characters and the action, although a little too bloody for my tastes. And one entire culture I did not care for At All. Perhaps because he was so good at describing it and it is opposite everything I hold dear. But if you're looking for an immersive world...he certainly achieved that!

I then decided to revisit Pern, so I dug out the Anne McCaffery books I already have and added a few more. Figured I needed something not so bloodthirsty. :) I read:

Dragonflight, Dragonquest, The White Dragon, Dragonsong, Dragonsinger, and Dragondrums. I then read one by her daughter, Dragon's Code by Gigi McCaffery. While Anne has said the books should be read in the order in which she wrote them, this one took place immediately after Dragondrums, so I snuck it in.

I continued with Moreta: Dragonlady of Pern, Nerilka's Story, Dragonsdawn, The Renegades of Pern and All the Weyrs of Pern. By the time you get to Dragonsdawn, the story has become much less fantasy and much more science fiction. An interesting blend, to be sure. This puts me at halfway through the full set of Pern books (there are 12 to go!), but I needed a bit of a break, so I headed off to Barnes and Noble to find another series. 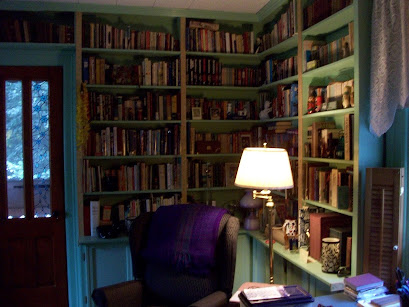 I'd read The Lies of Locke Lamora by Scott Finch before - and kept the book, which is a sure sign I liked it (I only keep books I might read again - take a look at those shelves! There isn't room for more!). I found the next two books in the series in the store, so picked those up. Also found some more lighthearted fantasy fare, so bought three of those, of which, I've only read The Outsourcer's Apprentice by Tom Holt so far. I also re-read The Lies of Locke Lamora in prep for the next ones.

If you're keeping track, that's a total of 14 books in July and 15 books for August, with a total of 46 total for the year. Yes, you read that right. I've read 29 of the 46 books in the last two months! Considering this is the last day of the month, the book I start today will go on September's list since I won't finish it today.

Playsafe - (and yes, I've been working on a new story in there as well!), wear a mask,