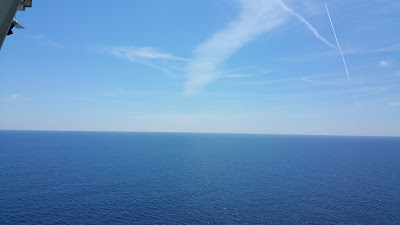 I have, at long last, completed one of the items on my bucket list: I have been so far out to sea that I cannot see land in any direction.

It isn’t that I didn’t know what such a thing would look like. One only has to stand on the of and look northward, then extrapolate from there. And I suppose, on our trip, we were at one point far enough out that land couldn’t be seen, but if we were, it happened at night and I didn’t see it, so it doesn’t count.

It’s more the vastness that I wanted to experience. To look out and not see any land is to see just how big the world really is. Even though this ship is huge, especially when viewed up close in port, out here it is nothing when compared to the sea.

And the blueness. No wonder sailors were thrilled to see green upon reaching land again. The sun is out today (as it has been every day – the weather has been spectacularly wonderful) which makes the sea a brilliant blue. Steven’s eyes take on this color sometimes. Perhaps I shall have to start calling them “Mediterranean Blue.” 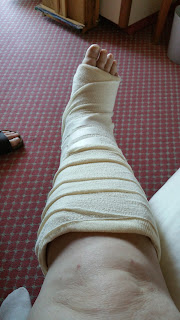 This was an at-sea day, so not much going on. Because of my broken leg, I mostly stayed in the cabin with it up. Steven did go down for the art auction just to see how one is run. Four-thirty saw us at sickbay again to speak with the doctor. She’d lost the information Steven had given her about Dr. Mark so she tried a conference call to him while we were there. He was in surgery and then the connection was lost when she was speaking to the nurse. She tried several times to get it back to get an email address, but couldn’t establish a connection.

I had to give one of the ship’s security officers a report – no, he didn’t wear a red shirt. J I assured him I have no intention of suing the cruise line. Steven decided the terrorists are at fault. If they hadn’t attacked the Bardo in , we’d have stopped there and I never would’ve been on to begin with!

AAA had arranged for a complimentary dinner in one of the swankier restaurants on the ship, so we ate at the Crown Grill. Our waiter was a very earnest young Indian who was quite competent and adorable. He’s probably not any older than Ben.

By the time we got back to the room, I was exhausted. Took two blue Tylenol and was out for the night.