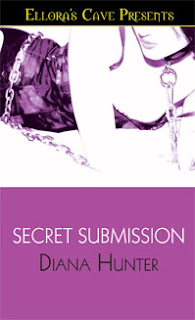 
Dinner done, Phillip helped her clear. “You wash tonight, slave.” Dutifully, she filled the sink with soapy water and began the chore. He dried, but had fallen silent. In quiet peacefulness, the two worked to clean the kitchen and do the dishes.

She was on the second to last pot when he put down his towel. So busy was she in scrubbing a tough spot, she did not notice him take off his shirt. Not until he stepped behind her, his body touching hers, did he get her attention. His hands rested on her shoulders a moment, then followed her arms, all the way down into the soapy water. Her breath caught and her knees weakened a bit as she felt his fingers entwining with hers.

Gently he took each of her hands and, with her holding the scrubber, he guided her hands, slowly cleaning the pot together. Around and around the rim he guided her, then deep into the pot itself; his hands sensuous in the slippery water. The pot clean, he helped her to lift it and rinse it, his hands caressing hers, his head dipping to kiss her neck.

Only the wok was left and she lifted it into the water. Again his hands encircled hers as she washed around and around the pot, her eyes following the movement of their hands, her body unconsciously moving as she became more and more aroused. He set her hands deep in the water and lifted the wok, rinsing it and setting it in the drainer to dry. Reaching into the dirty water, he pulled the plug, letting it go. Then soaping his hands with fresh soap, he lathered them. Full of suds, he took her hands in his again, washing the grease and old soap from them.

Running his wet hands up her arms, he watched the goose bumps rise on her skin all the way to her shoulders. “Spread your legs for me, slave.”

She shivered at his words and moved her legs apart for him.

“Lean into the sink and present yourself to me.”

Trembling, she leaned forward until her elbows were almost touching the bottom of the sink. Her ass was high and she knew how open she was for him.

“Looks like my slave likes this position,” he remarked. “Your pussy lips are already open, inviting me in.”


Her breath quickened as he stepped up to her again and bent down to whisper in her ear. “I am going to take you here, slave. I am going to use you right here at the sink.”