New cover and catching up

In case you haven't seen it yet, Cabin Fever has a new cover. Ellora's Cave is getting rid of their old Poser covers (finally!). While I liked the layout of the original, this cover has a much sexier look, don't you think? 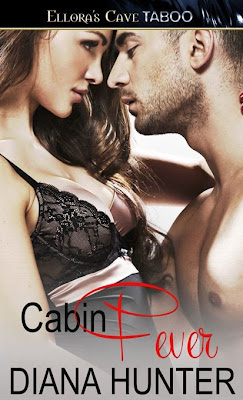 This story was a challenge to write because it only had the two main characters and, for the most part, a single setting. In order to keep everything straight in the cabin itself (where all the furnishings were, where the doors were), I drew myself a map of the interior layout.

I also had to do a day-by-day plotting as I wrote, in order to keep my timeline believable. Because the internals didn't change (the characters or the setting), it was easy to become lost in time and think only a day had gone by when it had been over a week. I'm a pantster when writing the first draft, but for this book I found I needed to keep a running record in order to keep their stories straight.

A few reviewers have taken exception to the ghost couple that make several appearances in the book. Their complaint was that they weren't needed; they distracted from the main story.

I don't know about that.  I kinda liked the idea of lovers separated by distance and tradition who finally get together through their grandchildren. What do you think? Should I have just bagged that part of the story and concentrated only on Daniel and Isabella?

Feel free to write a review that agrees with or disagrees with the others. And leave comments on EC's site about the cover, too! Let them know what you like.

I'm also writing what I suspect will be a long short story or a short novella revisiting Phillip and Sarah Townshend from Secret Submission and Submission Revealed. This September marks the ten-year anniversary of Secret Submission's release and I thought it would be fun to take a look at those two ten years later. SPOILER ALERT: They got married at the end of Sub. Revealed...are they still married ten years out? I'm writing the story to find out!

On a personal note:

My parents have made the decision to sell the house and move into an apartment. They moved out of the house I grew up in nearly twenty years ago, so I have no attachment to the structure, but it's still hard watching them make tough decisions as to what they can take with them and what has to go. Some things will be passed to us kids (there are three of us; I have a brother and a sister). Other things will go to a charity. Still others will be sold off in a tag sale.

Why am I telling you this? Because sometimes real life gets in the way of one's writing. I'll be spending a lot of time with them, helping them pack, helping them make decisions, helping them move. I'm glad I finished the Christmas story early because my late-summer, early-autumn will be taken up by all this.

This is a good move for them. They're moving to an apartment complex designed for senior citizens. There will be people there to check up on them and there's a pull-cord in every room for emergencies. There isn't a yard to deal with or maintenance of a large house to tire them out. It's the right thing for them to do.

It's also a hard thing for them to do.