CABIN FEVER is back! 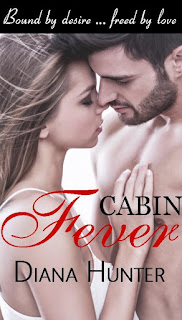 After a nearly four-year hiatus, Cabin Fever is once again available in both ebook and print formats. It's now available on both Smashwords and Amazon - so pick up this long-lost treasure today!

Isabel knew she was in trouble. Did all men take one look at her well-endowed breasts and think sex? No way was she going to make out in a tiny MG on some God-forsaken mountain with a date she never wanted to see again.

Daniel needed to forget a case gone bad and a relationship gone sour. Taking a leave of absence, he heads for a mountain retreat to deal with the guilt. The last thing he wants is company.

Forced together by a winter storm, neither gets what they want…but both get something better.

Click on the picture for a short excerpt and purchasing information or go directly to Smashwords or Amazon and download your copy now. Want the book in print? You can get that, too!

Want more Diana Hunter books? Check out this page and find all her books.

P.S. Watch this space for the next re-release, Services Rendered, coming at the end of March!

A snowstorm makes for an interesting winter for Isabel and Daniel...