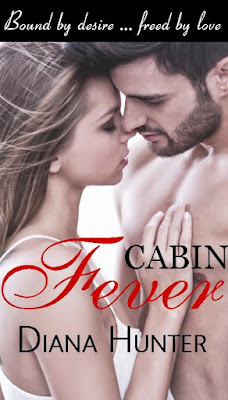 A snowstorm makes for an interesting winter...


Excerpt from Cabin Fever
by Diana Hunter
All Rights Reserved

Laughing, Isabel struck a seductive pose—hips slanted provocatively, eyes dropping down to look at him through long lashes with a demureness he knew she did not really have. While her teasing had been considerably less over the week, Daniel understood it was ingrained in her nature. Her lower lip came out in a small pout and he could not resist the urge to run his thumb over its softness. Stepping close to her, he murmured, “Best put that away before some little birdie comes along and poops all over it.”
He tried to watch impassively when Isabel’s breath caught and she tipped her head into his hand, setting a kiss in his palm. But the warmth of her breath on his skin ignited heat in his loins that was just too pleasant to ignore. What was there about a woman in a sweatshirt three sizes too big for her? Especially when it had been his sweatshirt. The pants, even though cut down, still were too wide in the legs and he longed to pull them off her and reveal the slender legs he’d grown accustomed to seeing. His hand cupped her cheek even as his thumb slid over her parted lips. In spite of himself, he bent down to claim the kiss she offered.
He paused as he drew near, expecting her to pull away as she had every other time he had come so close to her. Their breaths mingled as he waited, touching, tentative, expectant. And when she did not move, he leaned forward ever so slightly, his lips closing over hers to taste her for the first time.


“This delicious tale is quite a treat…filled with sexual tension, a bit of mystery and the gift of love.”
From the very beginning CABIN FEVER is addictive, I read the entire story in one sitting."

Keely Skillman of Ecataromance: “Cabin Fever … is a tasty winter treat full of tension and hear-warming tenderness…. worthy of being kept around for another read or five ...”

melina zora on Amazon: "Hunter does a great job keeping the suspense and anticipation right on the edge despite the fact that the whole story relies on two main characters and most of the action takes place in and around a tiny cabin."

A snowstorm makes for an interesting winter for Isabel and Daniel...