When we speak of characterization, we're really talking about what makes up a person's character. What he/she holds as near and dear. How the character behaves when no one's watching. Who he/she is at the very core of his/her being.

To that end, below the jump is a jpg. you can print out and use as a way to rank what's important to your protagonists (and antagonists -- they have character, too!). Take your time over this. What is the most important value your characters holds as truth? What values are less important?

Then go through your manuscript and see if that truth shines through. Does your character actually behave the way he/she would if that value were the most important? Can you create a scene (or even add in a line or two) that reflects the values not deemed important?

For example: Two people in a fancy restaurant having just finished an expensive meal. Both pull out credit cards to split the bill and one waves the other off. "My turn," the character says.

We know several things from this generic scene, including that one character is generous with money. That's a value statement. Now imagine the other character comes back with this:

"No, I won't be beholding to you for anything. I'll pay for my own meal and you can keep your money."

An entirely new value comes into play. Was the first character's motivation altruism? Or power? Is the second character's reaction based on independence? Or is it a plea to save face?

You see how important values are to the character of a character?

(SIDENOTE: To some writers, plot is the most important element of a story. Think Lord of the Rings or the Star Wars trilogy. What happens is more important than what the characters think of what's happening. Any of the current crop of superhero movies tends to be the same (with the arguable exception of the latest incarnation of the Batman series with Christian Bale in the title role).

To other writers, however, character is the most important element. Who the events happen to are the most interesting part. The motivations, the thoughts that go on inside their heads - these form the basis for the story.  Think Jane Eyre or Stuck in Neutral or heck, anything by yours truly!

(sidenote to the sidenote: wait till you get a load of the cover on this copy of Jane Eyre. What on earth were they thinking???)

Both approaches obviously have their place. And of course, the best literature is that which equalizes the two; stories where both what happens and who it happens to are of equal interest to the reader. Feel free to name your favorites in the comments.)

Okay, get to work! Remember, the jpg is below the jump and you can save to your computer and print out as needed. What are the most important values to your character? 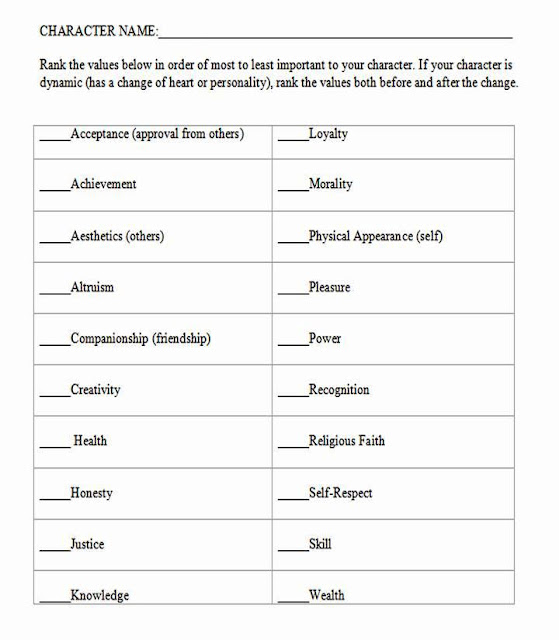