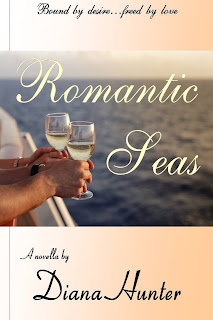 Yep, you read that right. I have written a new novella, full of hot, hot, hot romance and featuring two wonderful characters who are finding their true love -- even if it does come a little later in life.

So let me introduce you to Mary Elizabeth Flynn and Scott Henderson. Here's the blurb:

At sixty years old, Mary Elizabeth Flynn (Maisy to her friends) isn’t looking for romance.  The deep blue of the Mediterranean Sea, the coastline of Italy slipping by...what a wonderful, carefree way to spend a cruise. Maisy is grateful her friends talked her into joining them, especially when she meets Scott Henderson, tall, graying, and definitely handsome. Who is she to say no to a little shipboard romance?

ROMANTIC SEAS is now available for pre-order at Amazon and Smashwords (which has every format available, no matter what your ereader).

You want more? Oh, okay. Read on for a short excerpt:

Excerpt from Romantic Seas
by Diana Hunter
All Rights Reserved

Maisy’s thoughts warred with her libido as the two made their way to the Promenade. Was it only this afternoon she’d walked around this deck ten times? Now she took a leisurely stroll, her arm linked with a tall, handsome…Dom.

But reading and fantasizing were two vastly different beasts. She’d not been entirely truthful when she said she had the “occasional fantasy”—more like it was her only fantasy. One she’d never confessed to anyone. Not Peg, not Trish, not even the rare date she’d had while taking care of her parents. And certainly not to Tom. It was her secret, and hers alone.

And then Scott calmly shows her a picture of his wife and treats bondage as if it’s normal.

Well, perhaps it is for him, she thought, her gaze on the lights of a faraway ship. Not normal for me. Exciting…alluring…enticing, yes. Normal? Not even a little bit.

“You’re awfully quiet.” His voice interrupted her reverie. “If being tied up isn’t your thing, it’s okay. I still like you and would like to have you as a friend.”

“Oh, no, that’s not it. I like you, too.” She gathered her thoughts and pushed her libido to the side for a moment. “I’m just…It’s that…well, I don’t have any experience in the matter and I have no idea if I’ll actually like it, or if I’ll freak out, or what.”

“Would you be open to an experiment?”

“What kind of experiment?”

He didn’t answer, but pulled her close. With no preamble, he bent down and kissed her.

Her libido rushed to the fore once more as her knees grew weak and her arms went around his neck of their own volition. A whimper formed in the back of her throat, sighing out despite her attempt to stop it.

He deepened the kiss as his hand cradled her head, his fist tightening in her hair as his tongue touched her lips, seeking entrance. She opened for him, giving him reign.

His tongue touched hers and she slammed her knees straight lest they buckle, as her mind filled with thoughts of being controlled by the power he exercised. Gently, he moved her head, using her own hair to guide her mouth so he could take full possession.

He didn’t stay nearly long enough, however, breaking the kiss, dropping her hair, and stepping back to give her space, only keeping a single arm around her waist. She wanted to protest the sudden cool air that rushed between them on what, previously, she’d thought of as a warm Mediterranean night. But after the heat he’d created in her? The night was positively chilly and she gave a little shiver.

“After that? A volcano is icy.”

Her voice had dropped in pitch and she had to give herself a shake to keep her limbs from going all languid on her.

“So what do you think? I controlled only two parts of you—were you okay with that?”

The outdoor lighting cast a shadow on his face, but she thought he smiled.

Her voice firmer this time, she stood up straight. His arm dropped from her waist and, while she missed the contact, part of her was glad of it. She might be able to do this in only small doses. “No freaking out.”

Remember: ROMANTIC SEAS is now available for pre-order at Amazon and Smashwords (which has every format available, no matter what your ereader). Order now and avoid the rush!
OH! And once you have it in your hands and have devoured it, please return to the site where you purchased it and leave a review. We self-pubbed authors need them to be seen by others.
Play safe,
Diana
at Wednesday, June 22, 2022