To say the last few days have been a whirlwind is to discredit the life-upending capability of a whirlwind. You know that ancient curse? The one that goes, “May you live in interesting times?” Guess what…these days are certainly interesting!

I’m not one to panic. When reports of toilet paper and hand sanitizer shortages hit the airwaves, I was more puzzled than concerned. Until we were down to our last few rolls of toilet paper and I went to the store to buy more. There were fewer than a dozen packages on the shelves. I bought one 12-roll package, knowing it would do us for a few weeks and hoping there will be more when these run out.

The hand sanitizer also puzzles me. Doesn’t that kill bacteria? And COVID-19 is viral. How is that going to help? Seems to me the Clorox wipes are more useful there. And soap. Thankfully, my husband decided to try his hand at making his own soap this past fall, just because he wanted to learn the process. We’re well-stocked as a result. 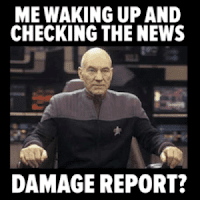 But the changes have been coming fast and furious. This is my favorite of the memes and feels like my current mode of operation.

To date:
On Wednesday, classes were moved online at Finger Lakes Community College, where I teach. I spent most of the day getting one class discussion up and ready to go when the students return from spring break – which has been stretched to two weeks instead of one. So one less three-hour session in which to get everything across.

Also on Wednesday, I went to do my normal grocery shopping (see “toilet paper” above). Again, not panicked, but because it was my shopping day. Decided it might be wise to get a package of cold medicine, just because we’re out. Bought both the kind I like and the one my husband prefers. One of each. Stocking up, not hoarding.

My husband, who has spent much of his adult life as a theatre director, took some time to tread the boards in a local production for the first time in several years. The play: Metamorphoses (a dramatization of Ovid’s work of the same name), the part: Midas. It’s been cancelled. The cast met together last night (Thursday) for the last time – on the set that had been built yesterday.

My daughter lost her job this afternoon (Friday) She is an assistant stage manager at Geva Theatre in Rochester, NY – and they just cancelled all performances of both stages. She’d already lost a job she was to start in a few weeks because the University of Rochester has shut down. Unemployment, anyone?

Both my Dad and my brother live in assisted living facilities. They’ve shut down and are allowing no visitors other than the one appointed caregiver (me, in both cases). I’ve made sure they have what they need, but won’t be going to visit unless needed as I don’t want to carry anything to them.
Because that’s the kicker. I could be carrying the virus right now and have no idea. THAT’S the real reason for all the cancellations and postponements. The virus may already be here…and may not. There is no way to tell. By the time you have the chills and fever, you’ve already given it to a hundred others. 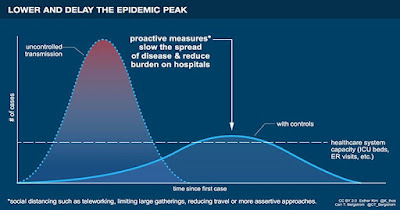 So I’m staying home, writing, reading, getting a few of my quickies put into a print book format, playing games on my computer, and teaching from my study. Am I a carrier? Probably not. Do I want to risk infecting others? Absolutely not. Staying home helps “flatten the curve” so our health care system doesn’t get overworked and I’m good with that, too.