Left the hotel by taxi at 9:15. We’d originally planned to walk the 1.5 miles to the car rental but after yesterday’s half-marathon, we decided the taxi was the better option. Got to see the statue to Sherlock Holmes, which is a surprising thing to find in . But it stands near the spot where Sir Arthur Conan Doyle was born. It’s relatively new, having been erected in 1991 and stands right across the street from the car rental.

Some misunderstanding about what we’d ordered, however. The clerk didn’t have us down for a GPS unit or for extra insurance. When we’d made arrangements for this trip with Linda, we’d asked for both in both countries. Had it in Ireland, but it was left off the Scotland rental. Steven gave him the credit card and added both pieces. We’ll talk to Linda about it when we get back.

We ended up with an onboard GPS unit and for once I’m glad to have it. I haven’t been able to find a decent roadmap of and hoped Hertz would give us one as they did in , but no luck. Just what I printed out from Google before we left. So good on the GPS.

Took an hour to get to Doune Castle and, once there, Steven giggled the entire time. This was a highlight for him. Why? Because it was the shooting location for Monty Python and the Holy Grail and the audio tour is narrated by Terry Jones. Lots of audio clips from the movie tossed in among the history of the actual castle. Built in the Middle Ages (around 1250) it is the oldest building we’ve visited on this occasion. Only the standing stones at Lough Gur are older.

As for me, has a different movie connotation: it is the shooting location for Castle Leoch in the Outlander series. To make it even better, there are certain parts of the audio tour that have been added specially for the Outlander fans – read by Sam Heughan himself. So the castle was a hit with both of us. J

Back on the road again. Still two and a half hours away from our next hotel. Took a bit longer than that because of road construction and because the A9 is actually more like Rt. 15 used to be: a two-lane road interspersed between several divided highway sections. So lots of slowdowns and the constant checking to figure out what kind of a road we were on. And, like , the two-lane sections had little to no shoulders. So a slow ride north to .

But we arrived safely and are now in the ! The hotel is pretty classy (but no upgrade this time) and we had dinner in their dining room this evening, mostly because we’re both too tired to get back in the car and drive into the city. Expensive and classy with nouveau cuisine. Interesting experience to have in the Highlands of Scotland.

Day 13 - a solemn start, a frustrating middle and an exhausted finish...

and environs day. We started out for Culloden Moor, not sure what we’d feel when we got there. This wasn’t our battle. We have no relatives who fought here, no nationalistic ties, not even much in the way of knowledge about the battle.

But as we walked the battlefield, listening to the explanations on our audio guides, Steven came to understand just how ubiquitous war is – and how hallowed the ground becomes when the blood of so many seeps into it. We spent quite a bit of time comparing it to and our experiences there, where you can feel the dead still lurking on the field.

And the battle tactics weren’t all that different from , either. Pickett’s Charge was across an open expanse with no cover – and all uphill. Those who did manage to make it to the top were tired and not fighting at their best. The Jacobite Charge across was long, with no cover and through bogs and water up to their knees. Highlanders came yelling all the way, expending energy they really needed to save for the actual fight. I spent a great deal of time wondering why they charged at all. The distance between the two armies was considerable. Why not wait for the British to come to them?

In any case, it was a moving experience and we left the battlefield with a new appreciation for peace.

and one smaller one. Some may have been used for burials, but mostly they were for ceremonial purposes. The roof has long since caved in on all of them; archeologists have removed those caved-in rocks to allow examination of the insides. You can walk through the entrance “hall” into the inner chamber now.
Clava Cairns was just a few miles down the road in a small dell. We had to take a rather winding single-lane road to get there, our narrowest yet, but Steven’s getting to be a pro at this. There are three large

Each cairn, once it was closed by the builders, had a ring of standing stones placed around the outside. One of these is cleft in two and is the inspiration for the stone Claire Beauchamp Randall steps through in Outlander. While Crag na Dun is fictitious, Clava Cairns is not and we took a lot of pictures.

Into the city of for exploration and lunch. By now it was nearly noon. The city is larger than I thought, probably about as big as , (I had figured about size. Quite a difference.). We parked in a parking garage – another new driving experience for Steven! Exploring the city center on foot was far easier – and it upped my steps for the day (just over 10K for me today).

Every place we stopped in, however, was full with no tables available. It was after 1:30 before we found a place that had space. Steven asked the maître‘d why the crowd and he told us Rod Stewart was in town. He has a concert in tonight and people had come early to make a day of it.
After lunch, we headed down to Loch Ness. We really weren’t going to take one of those tourist-trap cruises, but the sun is shining for the first time since coming to and we couldn’t resist. Too nice a day to stay on shore. 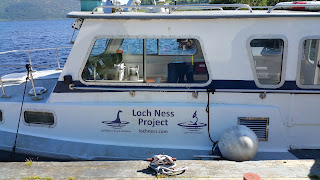 Luck was with us and we went out with a pilot from the Loch Ness Project. This is a group that, since the late 1960’s, has investigated every sighting to determine if there is a monster or not in the lake. While he never said so, the pilot is pretty sure there is not. He even had a sighting himself that, twenty years later, they figured out using advanced methods of photography. It seems there is a formation the ducks make that, at times and in certain lights, can look like a serpentine monster with a humped back. But it’s just ducks.

And that we saw. A single duck came over to the boat to say hello. We called her/him Nessie and were satisfied we’d seen the “monster.” As I said, it was a gorgeous day to be out on the lake and we felt privileged to be taken out by such an authority (He’s done several dives deep into the lake with the project and knew a huge amount about the various natural phenomena that masquerade as Nessie).

By now we were ready to go back to the hotel and decompress. We saw a lot while here and tomorrow is another travel day. If we ever do this again, I’m going to stick with three nights in each place (at least) rather than two. Steven is painting – the broom is in full bloom here and is spectacular and I am journaling.

Oh! This is the furthest north we’re going this trip – I checked but it’s not the furthest north I’ve ever been (that honor still belongs to ). However, the sun will set at 10:19 this evening and rise again tomorrow at 4:18 AM. While that sounds like six hours of darkness, it isn’t. The sky never gets totally dark. I’ve crossed two items off my list of Things to Do Before I Die: go to and see the sun not set. Yay!