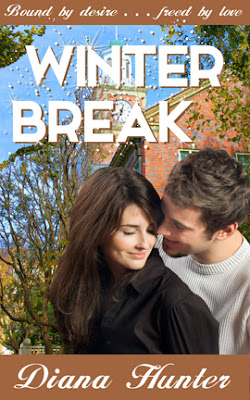 Can long-lost loves rekindle in the cold weather of a Winter Break?

Excerpt from Winter Break
by Diana Hunter
All Rights Reserved

So intent on her memories, Lynn missed the last step. Her arms flailed out as she grabbed for the railing. Her fingers slipped and she fell toward the two men. Strong arms caught her. Correction. Strong, dirty arms. Really dirty arms. An odor wafted from him and she tried not to wrinkle her nose as she got her feet under her. He smelled like he’d been crawling in a filthy basement.
Intent on brushing the dirt off her coat and piecing back together her pride, she didn’t look up, the words coming automatically. “I’m sorry. Missed the bottom step. Stupid of me to . . . ”
“No big deal. Glad I was here to catch you.”
Lynn froze. She knew that voice. How many times had it whispered sweet nothings in the darkness? At one time in her life, she’d intended to spend the rest of her life with that voice. Except life hadn’t turned out that way at all.
Steeling herself, she looked up and into the deep blue eyes she knew could set her blood on fire. Eyes that were wary now, reflecting the unease Lynn felt. Crow’s feet had grown beside those eyes since she’d seen him last, and his hair shone with a little silver mixed with the black she remembered.
And then he smiled, and the familiar dimples made her stomach flip over like they had a hundred times before.
“Hello, Lynn.”
“Tony. Good to see you again.” To her surprise, her voice sounded normal. She put out her hand to shake his, then pulled it back as he held up his dirty one. A handshake wasn’t right between them. What she wanted was to throw herself into his arms and hug him tight. More than hug him. Damn, but it wasn’t fair. How could he have gotten even sexier with age?
“It’s good to see you, too.”
They stood, an awkwardness stretching between them. Then Muscle Man shifted and Lynn smiled at the younger man. He was safe ground. She nodded in his direction, glad for the distraction.

* * * * *
Tony tried not to stare at the woman his first love had grown into. Lynn had always been pretty, but with age, she’d become beautiful. Short hair fit her, he thought, trying to focus on the top of her head rather than those incredible heart-shaped lips he’d rather be kissing.
And here he stood, looking like something mauled and dragged in by the proverbial cat.