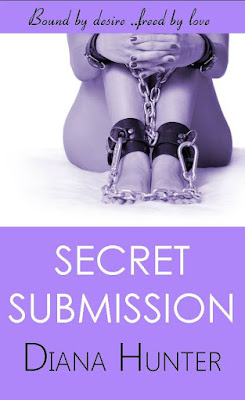 Excerpt from Secret Submission
by Diana Hunter
All Rights Reserved

She nodded again in response. Part of her couldn't believe she was actually doing this, the other part of her was so excited, she didn't trust her voice.
"Remember, once you leave the car, you will do as I say."
The warning tone was implicit, yet Sarah knew he meant it. She nodded again and took a deep breath at the sudden arousal his words caused inside her. She was voluntarily giving up all control – letting someone else take the lead. She, who prided herself on her ability to think through every problem she'd been given; she who led an entire set of teams at work. What would her friends and co-workers say of her now, agreeing to give up control to a man she'd met only a few times? She didn't care. It had been far too long since she'd had sexual relations of any sort. Putting thoughts of everyone and everything else aside, she opened the door and stepped out.
Shutting the door, she stood next to the car, suddenly uncertain as to what to do now. Just how far did this control thing go? Could she walk to the door without being told to do so? On unfamiliar territory, she felt the world wrench sideways a bit.
He smiled at her nervousness and came around the car, taking her hand. "Come with me, for you are now mine."
Frowning, she searched his face for signs of a power hungry fanatic and found none. He was still the same, smiling the way she'd enjoyed earlier. Stepping carefully in the dark, she followed him to the door of the cottage.
"Stay here and let me get the light." He unlocked the door and went in, closing the door behind him. Inside she saw a light come on as she waited. An owl hooted somewhere and she jumped. But then he was back, opening the door for her to enter. She sensed she had the right to back out yet; but once over the door, she was committed.
She stepped over the threshold.