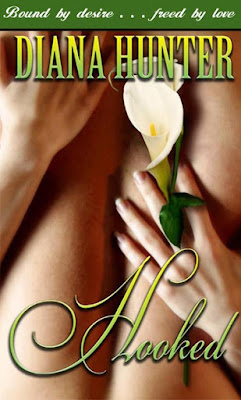 Jumping to conclusions can only land you in trouble!


Excerpt from Hooked
by Diana Hunter
All Rights Reserved


“Glorious day, isn’t it?”
“It is.” Now that Jim sat beside her, he noted the tight leather and tall heels. Weren’t those the kind called “fuck me” shoes?
Jim considered the direct approach, but then shied away from it when a uniformed patrol officer strolled by on the sidewalk outside the small fence that separated the café from the passing traffic. Narrowing his eyes, he considered whether she might be setting him up.
“So tell me, Tania. What’s a nice girl like you doing in a place like this?” He smiled after delivering the corny line and Tania laughed. It was a pleasant sound, he decided. And he liked the way her eyes crinkled at the corners when she found something funny.
“Just resting my feet. Shade and a seat are very welcome after an exhausting morning of shopping.” With an exaggerated motion toward her packages and an over-acted sigh, she met his levity, then raised the stakes. “And what’s a handsome man like you doing in a neighborhood like this?”
Tania leaned forward on the table, resting her chin in her hand and giving him a full view of her cleavage.


Jim’s eyes fell toward her breasts before he glanced up at her again. No blush painted her cheeks, only a coy smile and an invitation in her eyes. For a moment he was discomfited. While woman often flirted with him, they were never quite so transparent. And Jim’s tastes in sexual activity weren’t every woman’s cup of tea. Was she truly up to what he thought she was up to?

Wateena at Karen Find Out About New Books: "Impressive characters with witty dialogue and plenty of sexual tension makes this a spankin' good read!"
Birka from Cupid's Library: "This was my first book from Ms. Hunter but with such a convincing proof of her talent, I will have to check out more of her work."
Trang from ecataromance: "I thoroughly enjoyed this sizzling, short story of a chance encounter, mistaken impressions and sexual exploration!"
Tewanda from Fallen Angel Reviews: "Hooked is a charming tale about not judging a book by its cover."
Julie Esparza from Just Erotic Romance Reviews: "I recommend Hooked for the Silver Star Award for the delicious delightful plot, the addictive juicy orgasmic lovemaking and the fantastic emotional bond that develops between Tania and Jim. This is short story you do NOT want to miss. Read it once and you will be Hooked!"
Carolyn Crisher from Romance Reviews Today: "A juicy tale to while away an hour, HOOKED is just the thing for a quick read this summer."