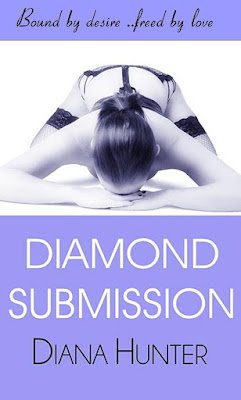 A peek into their lives ten years later...

Excerpt from Diamond Submission
by Diana Hunter
All Rights Reserved


She looked beautiful hanging there. Her straight brown hair still curled at her shoulders, although gray had started to show at her temples. He’d forbidden her to color it, liking the way it looked.
Truth be told, however, there was some vanity in his preference for her hair’s natural colors. With his own going gray much faster than hers, he didn’t want her looking too much younger than he.
She still held the same trim figure she’d had when they met. Eating right and having good genes helped them both. So did their membership to the Y. She was a strong swimmer, his Sarah.
His slave, he corrected as he leaned against the door frame and watched her. Her eyes were closed, although he doubted she slept. When she shifted position, balancing her weight on one foot, he knew she was awake.
Still, his intent wasn’t to startle her, so he backed up and made some noise coming down the hall. As expected, her eyes were open this time. She didn’t speak, but her gaze seemed troubled.
He reached through the bars and snagged her nipple, keeping his eyes on her to gauge her reactions as he fingered it. She remained silent, only giving a little sigh. When he pinched, hard, the look was annoyance quickly masked.
Double damn. He was out of touch with what she wanted and needed. How had they let this happen?


And, more importantly, could they salvage it?

Brynna Curry at You Gotta Read Reviews: "Diana Hunter is a new to me author, and I am pleasantly surprised by her. She will definitely be making a repeat performance on my ereader."