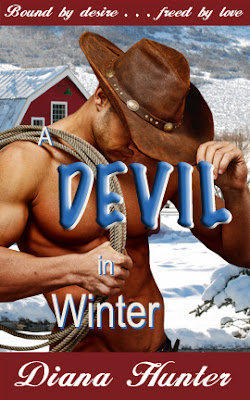 A Devil in Winter

Frustrated in love? Sometimes you just need to look at what's right under your nose...

Kevin watched her cross the parking lot, oblivious to his presence, while memories tormented him. Torn between wanting to make her suffer and wanting to make love to her right there in the parking lot, he decided an aloof panache would be the best approach. Groveling was not his style, although, as he caught a glimpse of those beautiful, shapely legs in thin-heeled boots, he decided he could be persuaded. Affecting an air of nonchalance, he waited until only a car-length separated them, before stepping in front of her.
And landed on his backside, the plastic bag of groceries spilling into the parking lot, and his panache flying off into the evening sky trailing laughter behind it.
“Kevin? Is that you? Are you all right?”
Her voice still held the promise of satin nights and spectacular romance. Kevin shook his head in resignation. “Yeah, it’s me. And I’m fine.” He glanced at his hands, now wet and dirty and brushed them off on his ruined dress pants. “Saw you across the lot and thought I’d drop in.”
She laughed, as she always had at his bad jokes and extended a hand. Kevin took it, feeling again the warmth and deceptive softness of her skin. He knew full well the steel rod of control hidden by that softness. A steel rod he’d never gotten around to bending. As he stood, he pulled her into his arms with a practiced move that belied his earlier clumsiness.
“How are you, Pam?”
His voice, no more than a murmur, unnerved her exactly the way he knew it would. Flustered, she took a step back.
“I’m fine, Kevin.” He watched her arch her eyebrow as she slammed the steel rod back into place.      “And how are…you?” She pointedly peered around him to draw attention to his soaked ass.
“Wet.” After weeks of not returning his calls, of ignoring every overture he made to her, she was finally talking to him. Despite his wet clothes, he couldn’t keep the optimism out of his voice.
“You need to change into dry clothes before you catch cold.”
Kevin shook his head. “My apartment is all the way ‘cross town.” For good measure, he added a little white lie. “And the heater is broken in my car.”
Pam laughed out loud and Kevin grinned to hear the deep, throaty sound that she often told him only he could get her to make.
“Kevin, you are such a liar. My apartment’s right around the corner, as you very well know. I suppose you can come in and we can throw your pants in the dryer.”
Kevin’s heart soared. Score! After weeks of unreturned phone calls, his foot was in the door. He dared to hope she’d broken up with the guy he’d seen her with in the restaurant, but had enough sense to not mention her hopefully former boyfriend. Instead, he accepted her invitation, even offering to return to the store for her and pick up whatever she needed.


“Just a quart of milk and loaf of whole-wheat bread. Thanks, Kevin.” Pam turned to go back to her car, but only took a step before turning back to him. “And condoms.” The twinkle in her eyes made her meaning clear.